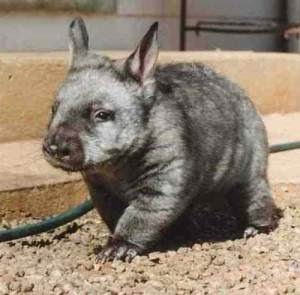 They've always been uneasy bedfellows, but now Hairy-Nosed Wombats - a rare and protected marsupial - are being slaughtered in large numbers by South Australian farmers as their numbers boom thanks to abundant rain and plenty of food.

Nearly 900 southern hairy-nosed wombats have been shot with South Australian Government sanction since 2006, and there are claims that many more have been slaughtered illegally.

The Government also has rules which state that any young wombats found in the pouch of a shot wombat should be killed by decapitation, as this achieves "a sudden and painless death".

Sickeningly, Parliament has been told that apart from the official deaths, hundreds more wombats are being killed illegally by landholders across the state.

As well as being the state's animal emblem, the wombat is classed as a vulnerable species, but farmers claim its burrows destroy their land and damage farm machinery.

Like badgers in the United Kingdom, wombats are much maligned by the farming community and are seen as a menace, copping the blame for everything from soil erosion and breaking the legs of cattle (from falling into wombat burrows) to spreading disease.

Official figures show that between January 1, 2006, and December 22 last year, 139 permits were issued for destruction of South Australian wombats.
Posted by RR at 22:04