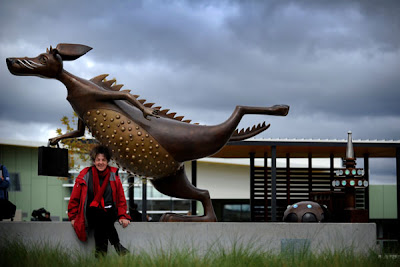 Wow! It's been about 30 years since one CFZer read Michael Salmon's children's book, The Monster that Ate Canberra, which introduced the iconic Alexander Bunyip! 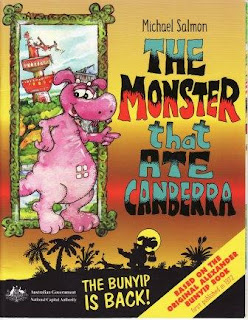 And now the famous cryptid has been immortalised by sculptor Anne Ross in 500kg of bronze in her 'A is for Alexander, B is for Bunyip, C is for Canberra' creation. The 2.2m sculpture has been erected out the front of the new Gungahlin Library.

The $175,000 artwork was commissioned by the ACT Government for Gungahlin's $3.8million town park. It includes miniature versions of the National Library, the Shine Dome and Telstra Tower some of the buildings eaten by the Bunyip throughout The Monster that Ate Canberra.

When author Michael Salmon sat by Lake Burley Griffin as a student in 1970, he envisaged a King Kong-type character munching its way through Canberra's cultural institutions.

"Alexander Bunyip has always been Canberra's bunyip from the moment I conceived him in book form,'' he said. "To actually see him here almost 40 years later is brilliant."
Posted by RR at 22:00