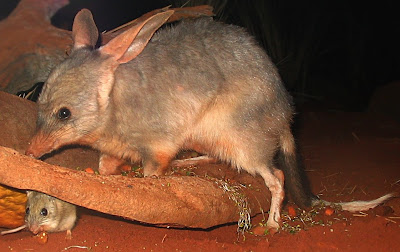 The Australian Greater Bilby (Macrotis lagotis, pictured above) is known to 'breed like rabbits' - if given half a chance - an attribute that could help the animal claw its way back to non-threatened status.

Tragically its cousin, the Lesser Bilby (Macrotis leucura), became extinct in the 1940s, although a skull was found in a Wedge-tailed eagle’s nest by P. Hanisch at Steele Gap in the Simpson Desert, Northern Territory, in 1967. The bone was still relatively fresh, and was estimated to be less than 15 years old.

The Greater Bilby wasn't far behind before the establishment of 'the Bilby Fence' in Currawinya National Park. The fence stops foxes, dingoes, feral dogs and cats from preying on the vulnerable marsupials, and competition from rabbits, and ensures the survival of this 'insurance population' of bilbies.
This week Channel 10 aired 'Bilby Dreams' over the Easter long weekend - great timing considering the Greater Bilby has been held up as an alternative Easter icon as part of a campaign to raise awareness about its plight.
'Bilby Dreams' is a documentary following the inspirational journey of Peter McRae and Frank Manthey, sees the two men pioneer a national fund, a protected colony and a breeding program in an effort to save the bilby from extinction.
This is the story of two men who’ve dedicated the last 10 years to saving a species. They’ve done so well, it could be a model for the future, helping many other threatened animals. 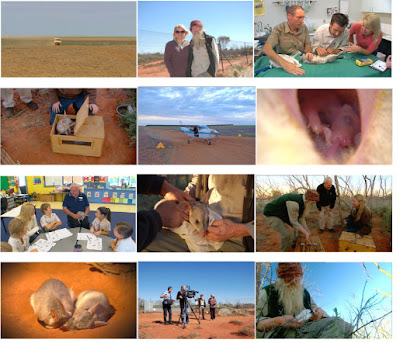