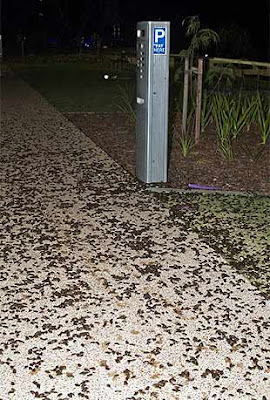 Thousands of beetles are swarming Surfers Paradise in a never before seen phenomenon that has stumped local scientists.

The water beetle invasion captured on amateur youtube footage shows the large black beetles swarming around lights and dropping to the footpath on The Esplanade last night.

Griffith University entomologist Professor Clyde Wild said he had no definitive explanation for the rare phenomenon.