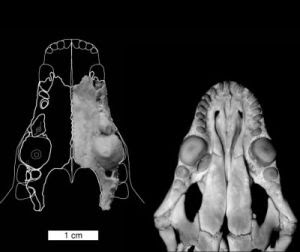 A fossil of a snail-eating marsupial has teeth that resemble a lizard's, providing a striking snapshot of convergent evolution.

Malleodectes, a small ferret-like marsupial that lived 10 to 17 million years ago, had a distinctive hammer-shaped tooth on each side of its upper jaw, said Rick Arena, lead author and palaeontologist at the University of New South Wales in Sydney.

These findings, published this week in Proceedings of the Royal Society B, are an example of convergent evolution, which occurs when two unrelated species have similar physical features.

"It's a striking example of evolutionary convergence, and the first example of a marsupial with teeth that resemble a lizard's," said Arena, who discovered the jawbones in the famous Riversleigh World Heritage fossil field in Queensland.
Posted by RR at 09:14