Are there big cats in Australia? 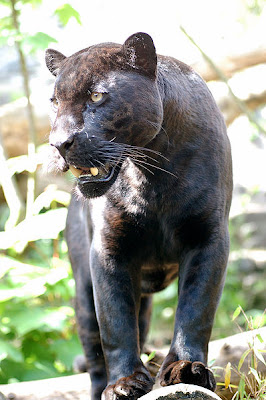 Australian naturalist Gary Opit has been a wildlife consultant for ABC Radio for more than 10 years, and has written about all manner of animals - including ones that aren't supposed to be here!

Here is an article Gary wrote a few years ago about the existence of Australian Big Cats, which features on the ABC's website. Gary believes pumas roam Australia's wilds - what do you think?

"One of the great mysteries of the Australian bush concerns the reported sightings of big cats usually described as pumas or black panthers.

"In north-eastern NSW stories of the "Tyagarah Lion" have been passed down over the years. Local resident David saw one bounding along the side of the road and reported to me, "This was along the Old Tyagarah Straight in about 1979, and I' ve never forgotten it."

"Neil saw an animal that he could not identify in June 2003 while driving to Rosebank from Clunes at 8.30 pm. Two km to the south-west of the general store he and a friend saw in the car headlights an unusual animal cross the road 6 to 12 metres in front of them. It had a feline-like face and a long body and tail, from snout to tail tip at least one and a half metre in length, covered with yellow tawney fur.

"There have been over one thousand reports of sightings in every state received by researchers, several have been photographed or videoed and at least two have been shot. Retired businessman Dale O'Sullivan unveiled to the media a stuffed puma in October 2003, which he said was shot by his father at their Woodend cattle stud property in Victoria the 1960s. The puma was stuffed and stored in a back room and forgotten about for nearly half a century.

"When I was down in the Grampians in Victoria 1982, I was surprised to find that most of the forestry workers, the Hamilton Mayor, the Superintendent and some of the staff of the Hamilton Water Trust had all had close encounters with brown and black pumas. Farmers showed me photos of sheep carcases hanging in gum trees or lying on the ground stripped of flesh. The only problem is that black pumas are unknown as specimens in museums or zoos. However, there have been many unconfirmed sightings of black pumas in North America. It is possible that if pumas are reduced to very few individuals then the inbreeding will produce a melanistic colour phase.

"Reports have been received from Australian military personal at bases across the nation during WWII that pumas were kept at several bases and that US airmen used a compartment in Vultee Vengeance dive bombers to smuggle the cats into Australia. Brown and black pumas have been regularly sighted at Cordering in south-west Western Australia, Darwin, Cape York, the New England Tablelands, the Blue Mountains near Sydney and in Gippsland.

"Mr Kurt Engel, a 67-year-old retired engineer of Noble Park, Victoria shot a panther-sized black cat while hunting deer in rugged terrain near Sale, Gippsland in June 2003. "He came straight towards me. I saw his teeth and white eyes. I was only about 80 yards away. I pulled up the rifle and at that moment it turned to the left. He was making long jumps. On about the third jump I shot him. The bullet entered behind the cat's shoulder and blew its head off," he said.

"In November 2003 a NSW State Government inquiry found it is "more likely than not" a colony of "big cats" is roaming Sydney's outskirts and beyond. The revelations were the result of a four-month investigation into the "black panther phenomenon" which for years has plagued residents across Sydney's west, north-west, Richmond, the Blue Mountains and Lithgow. While National Parks and Wildlife officials are yet to implement a positive course of action, a senior source confirmed a big cat expert had been contacted with a view to future work.

"In May 2001, a successful Freedom of Information request revealed the NSW Government had been maintaining a secret file on the creature. It also revealed wildlife hierarchy were so concerned about the potential threat to humans that they commissioned big cat expert Dr Johannes Bauer to evaluate what had previously been deemed unthinkable. He concluded: "Difficult as it seems to accept, the most likely explanation of the evidence... is the presence of a large feline predator."

"When Kenthurst teenager Luke Walker suffered deep cuts in March 2003 and said they were the result of a terrifying struggle with a panther-like cat, the NSW Government reopened the case. A report compiled by NSW Agriculture included a review of sightings and extensive interviews with residents of Grose Vale, where the creature has frequently been sighted. It found that recent witnesses to big cat activity in NSW were highly credible.

"Also taken into consideration was a previous report by Dr Keith Hart, district veterinarian of the Moss Vale Rural Lands Protection Board, who, after testing scat samples, concluded a large cat was living in the Grose Vale area. The report said, "Nothing found in this review conclusively proves the presence of free-ranging exotic large cats in NSW, but this cannot be discounted and seems more likely than not on available evidence."

"One theory the report refused to dismiss was that "historically, sightings in Eastern Australia occur in old gold mining areas and that anecdotal evidence suggests pumas (Puma concolor) were brought to Australia by American goldminers in the 1850s. The report added, "These animals may have subsequently escaped or were released, causing numerous sightings over many years."

"It seems unlikely that any of these animals are black panthers, which are a melanistic colour phase of the leopard. It is more likely that we have American mountain lions running wild and perhaps giant black feral cats as well. It looks like there really is a breeding population of big cats now stalking the Australian bush." 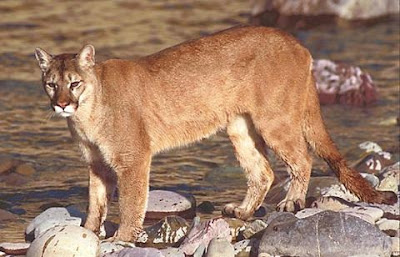