All this wombat needs is love 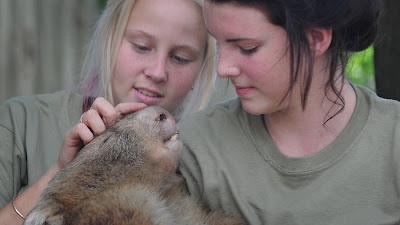 A WOMBAT has been diagnosed with depression - after being denied the cuddles and pats he was used to following Cyclone Yasi.

The wombat, named Tonka, shed 20 percent of his body weight as visitors were stopped from visiting his wildlife park home in the eight weeks after Cyclone Yasi tore through northern Queensland, reported the Townsville Bulletin.

Tonka's carers at the Billabong Sanctuary in Townsville spared no expense in vet checks and lab bills as they tried to work out the cause of his mysterious illness.

Billabong Sanctuary manager Brett Flemming said after "forking out some serious cash" they found the problem - and have since nursed him back to health, in time for the repaired park to reopen.
Posted by RR at 21:44