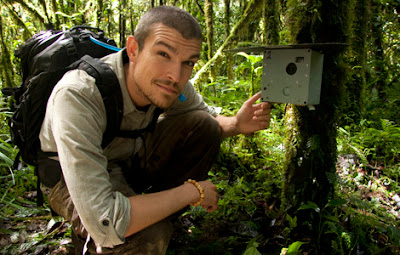 It certainly gave us a taste of what we're heading in to - the dense jungle, changeable weather, the many wild creatures we'll be keeping company with, and some of the risks involved.

The episode is one of several in a new series hosted by Pat Spain, an American wildlife biologist with an enthusiasm for cryptozoology (and a distant relative of Charles Fort, no less!).

Pat explores the terrain, chats with locals, interviews witnesses - including Debbie Martyr, a resident ex-pat Brit who has seen the animal and now devotes much of her time to cataloguing sightings - and sets up camera traps with resident wildlife photographer and witness Jeremy Holden.

While an enjoyable program, with a great host, it has to be said - it is mildly irksome the way these TV shows fall into the familiar rut of continually ignoring the people (and research) that precedes them.

Instead of reinventing the wheel for the purposes of television, it would have added something to the program had the crew explored the angle of the hair samples and footprints already collected and analysed (Adam Davies/CFZ in 2005 and 2009), especially considering the episode had such a science focus for the host. Just a thought for next time guys!

Despite that criticism, it was a great episode and a very promising television show. Looking forward to the rest of the series.
Posted by RR at 22:29