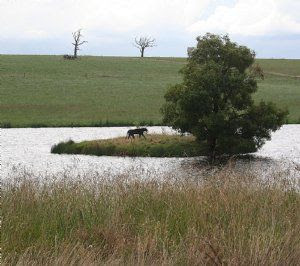 A METAL 'panther' silhouette erected along the Deans Marsh-Lorne Rd has fooled many motorists into thinking they've spotted the Otways' mysterious big cat.

For three weeks drivers have pulled to the side of the road for a second look, believing they have seen Victoria's elusive black panther.

What they don't know is that the Deans Marsh 'big cat' is actually a metal sculpture drilled into the ground - an elaborate prank designed to fool unsuspecting tourists.

The anonymous prankster and a friend said they were motivated by the recent State Government probe into sightings of the state's 'panthers'.

Ironically, many of the pair's neighbours have claimed to have spotted a big cat - well before they unveiled their metal moggy!
Posted by RR at 10:35