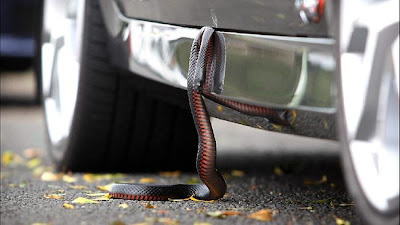 A Sydney driver was bitten by a 2m red-bellied black snake after stopping his car to check on a strange banging sound coming from beneath his new car.

Upon opening the driver door and getting out, the snake reared up and bit him, prompting the driver to slam the car door, trapping the snake (pictured above), while he ran around to the passenger side of the vehicle to get his phone and call for help.

It seems the recent wave of hot days in NSW has prompted many snakes to make the most of the last few warm weeks of Summer before temperatures take a dive.

Though the venom of the red-bellied black snake is capable of causing significant morbidity, it is not generally fatal and less venomous than other deadly Australian snakes. It is common in woodlands, forests and swamplands of eastern Australia, and is one of our best-known snakes, as it is common in urban areas.

Happily, we can report the driver survived his ordeal, as did, surprisingly, the snake!
Posted by RR at 10:09