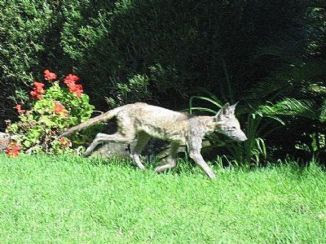 A mystery creature, dubbed the “Dunes Dingo”, has been spotted several times in recent weeks roaming the Tennyson dunes.

The Portside Messenger sent a photo Mr Finder took of the animal to the Dingo Discovery Sanctuary in Victoria, which quickly solved the mystery.
The sanctuary’s Lyn Watson said the animal appeared to be a fox suffering from mange.

“It does look on the large side (for a fox),” Ms Watson said. “The tail carriage points to fox rather than dingo. Foxes do not have control of their tails like dogs or dingoes do.”

Mange is a contagious skin disease caused by parasitic mites.
Posted by RR at 09:50