Do mystery bones belong to Thylacine? 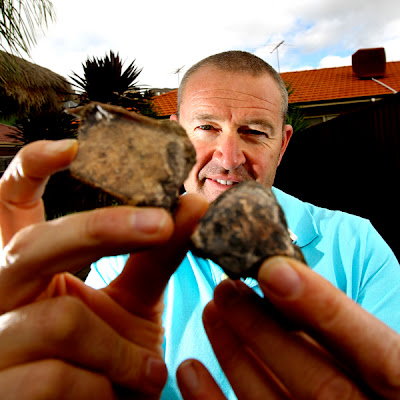 ANCIENT bones that could be the 5000 year-old remains of a thylacine, also known as a Tasmanian tiger, have been found in a Gowanbrae backyard, according to a newspaper report.
The chance discovery was made in the Melbourne home of Craig Davis last week during soil testing for an in-ground pool.

The soil was tested by Footscray resident Andrew Sandford, who is a qualified palaeontologist.
The bones were found about 1.5 metres underground.

The pair had been concerned the bones were of a human, but police have ruled that out.

"Straightaway the initial thought was it could be human remains and when I saw what looked like a knee joint I thought, let's stop, and called the police," Mr Davis said.

Relieved there was not a body buried in the backyard, the curious duo then decided to dig deeper to see what they could find.

Mr Davis, who has owned the block since 2001, said the pair planned to keep digging in the hope they could put the skeleton of the animal together and identify it.

He said it was "pretty exciting" to find something so old in his backyard.

"It will be interesting to know what it is from a scientific standpoint. It certainly gives you something to talk about. Now we think we will have to name the pool the Jurassic Pond," he said. "All the local kids have been lining up asking if they can borrow the bones for show and tell."

Mr Sandford said the bones could be more than 5000 years old.

"I knew that bones of Australian mega-fauna had been found in swamps north of Melbourne. The clay that we were digging through was clearly swampy. It was very black and had a lot of organic matter.
"The bones have been found in undisturbed clay that hasn't been dug up before. The bones had surface minerals and natural cement growing on them, indicating they are old."

Mr Sandford said it was possible the bones could be of an animal that is part of the mega-fauna family such as a giant kangaroo, marsupial lion or a Tasmanian tiger. "The bones are, in fact, about that size so it could well be something like that. At the same time, it might be kangaroo bones that aren't very old at all. That's also a possibility."

He said that for someone like himself who used to collect fossils as a teenager, it was an exciting find. "Only in occasional circumstances are bones preserved for such a long time. Now we want to dig it up and try to identify it. So far we have found the lower section of the leg."