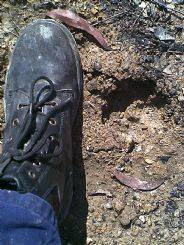 THE discovery of large paw prints on a Humevale property in January 2010 has sparked speculation of panthers living in the Whittlesea bush, according to the Whittlesea Leader.

The indentations, about 100mm in diameter and resembling big cat prints, were found in the driveway of Colin Hill’s home, invigorating Whittlesea’s own big cat legend.

“There was a set of tracks at the bottom of the driveway that crossed the yard and disappeared down into the valley,” Mr Hill said last week. “They were definitely a cat print and were as big as my fist. Judging by the size, I’d say they had to belong to a 50-80kg animal.”

It was not the first time Mr Hill had come across such tracks.

“Before the bushfires, I found another set of tracks down near a dam on the next property,” he said. Those prints were photographed, but the pictures were destroyed in the Black Saturday bushfires.

Mr Hill said they resembled the prints of a large cat with long claws. “The animal has used its claws to help lift itself out of the mud and the prints were unmistakable,” he said.

Two years ago, he shot and killed a small jet black animal with yellow eyes which he believed at the time to be a feral cat. Now he said it might have been a panther cub.

“At the time I didn’t even think about it, but I’ve never seen a cat with yellow eyes,” he said.

“After seeing the tracks, I wonder if it had been something else.”

Victorian big cat enthusiast John Turner said it was difficult to determine what had made the prints.

“They are interesting but not definitive,” he said, adding that they might have come from a large dog.

Mr Hill was convinced they were not from a dog.
Posted by RR at 11:31