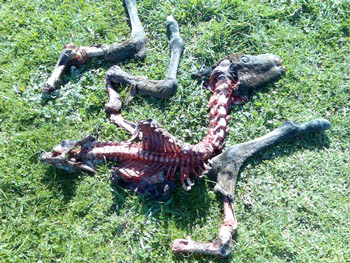 The Geelong Advertiser featured this piece by big cat researcher Simon Townsend this week, repeating the call for a more physical approach to the Victorian Givernment's investigation of big cat reports in that state:

THE enthusiasm which the new Victorian Government has displayed in honouring its election promise to investigate alleged big cat sightings and unexplained stock and wildlife killings is admirable.

However, it is not necessarily realistic to think a limited investigation will determine once and for all whether there was any truth behind the sightings (GA 29/1).

The only thing that will provide indisputable proof of what may be causing the killing of stock and of large wildlife will be a specimen and that may take some time, as I well know.

Photographs in this age of digital photography cannot be acceptable evidence.
My colleague John Turner and I have uncovered a number of attempted hoaxes of big cat photographic proof in the past.

The State Government is in a position to gather evidence utilising its own existing agriculture, wildlife and public lands staff and infrastructure.

It will also be offered voluntary help from some private researchers.

The government has the funds to conduct DNA testing on predator scats and kills to determine the species of predatory animals involved.

It can also supply and maintain appropriate wildlife cameras in areas of greatest stock killing activity to at least indicate what sort of undescribed predators are operating.

Specific strategies could then be adopted when a given species is tentatively identified.
For more information regarding mystery predators in western Victoria and their stock killing our website www.bigcatsvic.com.au addresses these problems.

Whether compensation should be offered to farmers (GA 31/1) is problematic, since it is not given for other predator kills such as by foxes and wild dogs and dingos.

At the end of the day, the main thing is that Peter Ryan of the Nationals has honoured an election promise that the outgoing government did its best to ridicule.

Let us hope a specimen of whatever is taking sheep and adult kangaroos in the Eastern Otways is lodged in the State Museum soon.

* Simon Townsend lives at Freshwater Creek.
Posted by RR at 11:03