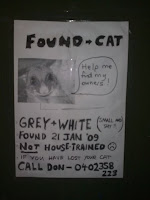 Across the Internet, people have been finding cats. But these 'cats' are not cats of the Felis catus variety, but various cases of mistaken identity by the hapless do-gooding animal lovers seeking to re-home their charges. Or so this popular joke would have you believe!

Many Australians have already either seen the above posters pop up in their inboxes among their daily stream of joke emails, or spotted the images plastered on posters attached to electricity poles and traffic lights.

In the past few years the 'Cat Found' posters have become something of a phenomenon, popping up all over the world with variations on the theme.

The posters above show a native Australian possum, with the posters below show the North American Opossum. The picture at the bottom shows an English badger, and popped up in this post over at CFZ UK courtesy of Simon Reames this week.

We know some people who have had the distinct displeasure of having real possums fall down their chimneys or enter their homes via the roof space, and can vouch for the 'not house broken' line. To quote one 'experiencer': "I've never seen so much shit and piss in my life - it literally covered three bedrooms and the hallway. It must have been there for days but my housemate swore it had only been trapped inside for a few hours."

Lest you feel compelled to answer one of these appeals, you have been warned! :-) 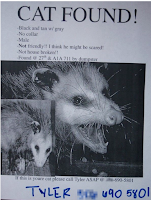 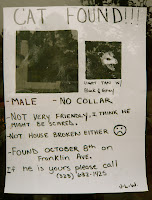 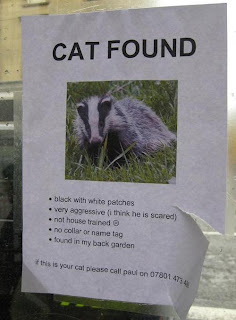