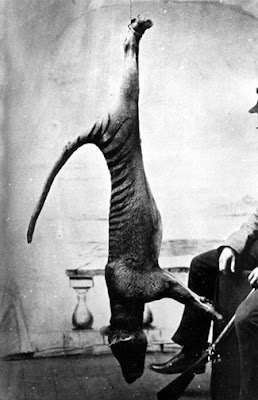 One of the largest private collections of Tasmanian Tiger artefacts has gone on display at a Tasmanian museum, as reported a few months back on this blog.

Australian Geographic magazine this week has a great article and interviews with the curators of the collection.

The Thylacine has become an Australian icon since its extinction in the early 20th century at the hands of Tasmanian hunters. However, according to Dr Nic Haygarth, an historian at the University of Tasmania in Hobart, mystery and fear surrounded the thylacine in years past.

Mineral prospectors, for example, lived in fear of thylacines in the Tasmanian wilderness. "These guys were alone in the bush, during the 1850s to 1870s, when there was no infrastructure," Nic explains. "A thylacine could take their food, in which case they'd be in a desperate situation. But there was also genuine concern that a thylacine would kill, or bring its mate back and there would be two to deal with."

There were reports of instances in which thylacines followed people for extended periods, Nic says. In particular, he remembers the story of surveyor Selby Wilson who, in the 1890s, claimed he was followed for a full day by a thylacine. "He was completely freaked."