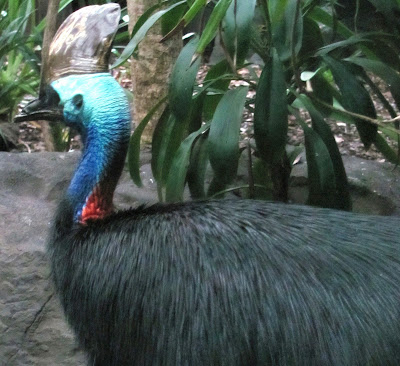 THE Queensland Government has started food drops for a lesser-known victim of Tropical Cyclone Yasi - a population of cassowaries near Mission Beach.

Last week's cyclone destroyed much of their normal food sources and government officers are also setting up feeding stations to ensure the surviving cassowaries have nourishment.

In more inaccessible areas however, they will use helicopters to drop fruit in, Environment Minister Kate Jones said.

"This will make a real difference for one of our unique animals in need," she said.

But Ms Jones warned people not to feed cassowaries, both for their own safety - as cassowaries can become aggressive - and so the birds don't become dependent on human feeding.

The cassowary is a large flightless bird native to the tropical forests of New Guinea, nearby islands and northeastern Australia. The Southern Cassowary is the third tallest and second heaviest living bird, smaller only than the ostrich and emu. Shy but aggressive when disturbed, cassowaries are capable of inflicting serious injuries to dogs and people.
Posted by RR at 10:21