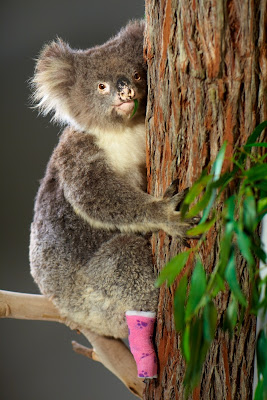 SAM the Koala has been immortalised alongside Phar Lap in the Melbourne Museum.

The Mirboo North marsupial shot to fame after an image of her drinking from local fire fighter David Tree’s water bottle was circulated around the world.

She died weeks after the Victorian bushfires, but the famous image helped lift spirits and raise money in the wake of the devastating summer bushfire of 2009.

A taxidermist has stuffed Sam’s body and placed it on a tree trunk, which will be displayed in the foyer of the museum.

Victoria’s Arts Minister Lynne Kosky was on hand to launch the new exhibit.

“The images of Sam and her rescuers came to define the wonderful spirit of community and friendship that is now helping Victoria rebuild – and I commend the people who worked so hard to care for her,” Ms Kosky said.

“It is fitting that Sam will have a permanent home in the Melbourne Museum where children and families will be able to visit her and learn about her story.”

Museum Victoria CEO,  J Patrick Greene, said for millions of people here in Australia and overseas, Sam the Koala represents the tragic impact of the summer 2009 bushfires on people’s lives.

“Sam became a symbol of the enormous loss felt by so many in the aftermath of last year’s terrible bushfires, and for this reason I believe it’s important that visitors from Victoria, across Australia and from overseas can see Sam and be reminded of her story and the events of Black Saturday,” Dr Greene said.
Posted by RR at 20:57