Orange-bellied parrot headed the way of the Dodo 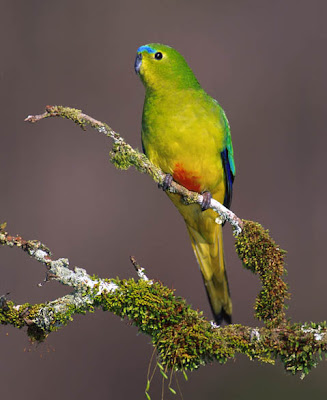 In today's edition of The Age, freelance writer Debbie Lustig writes about the precarious situation of Australia's endangered orange-bellied parrot.

"Birdwatchers have been wondering for some years when the worst would happen; when the last wild bird would die. That's why I jumped for joy on hearing the news that in the state's remote south-west at least 20 of the beautiful little birds have been breeding, producing 12 chicks, a sizeable number when the total population is a mere 50.

"The continued, precarious survival of this species is miraculous, considering what we have done to destroy its habitat. On the coast between South Australia's Coorong and Wilson's Prom, the birds were once common in winter. There are older people who remember them in the 1950s at Fishermans Bend on Melbourne's doorstep.

"Despite funding since the mid-1980s for a recovery plan for the orange-bellied parrot, despite occurring in several internationally listed wetlands, and despite listing under the 1999 Environment Protection and Biodiversity Conservation Act, this bird seems determined to decline. Among birders, some say the orange-bellied parrot is done for already. Among the scientists charged with saving it, no one works full-time on the bird..."