Apparently Ian can't be stuffed anymore. That was going to be our cheesy headline, but we've been ripping out a few too many taxidermy puns of late, so we'll play this one straight.

The NT News, one of Australia's most colourful newspapers, however couldn't resist a naughty headline for this interesting story about the impending retirement of taxidermist Ian Archibald, the man behind one of the Museum and Art Gallery of the Northern Territory's most famous exhibits - 'Sweetheart', the monster croc: 'Sweetheart, Ian can't be stuffed'.
Apparently Ian hadn't been with the museum long in the early 1970s when he was charged with the job of preparing and mounting the 5.1m saltwater crocodile, which was caught in the Finniss River.
The outboard motor-crunching croc, a habit which swiftly brought about his demise, is pictured above getting the immortality treatment from Ian (pictured at the croc's head) and his colleagues.

Good luck Ian. And yes, we're just using Ian's retirement as an excuse to show you a cool photo. I'm sure he would understand. 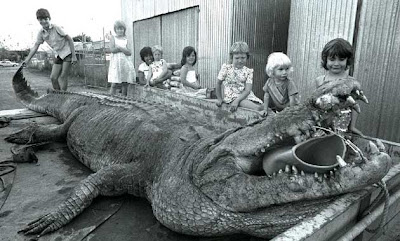