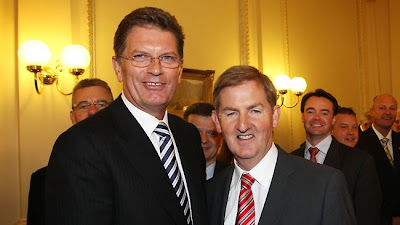 It was inevitable really that the Victorian State Government 'big cat inquiry' would quickly slip into the farcical sideshow we're now privy to courtesy of articles in this week's Weekly Times and The Sunday Age.


The Liberal-National coalition, led by now Premier Peter Baillieu and his deputy Peter Ryan, were desperate for votes, and happy to promise the moon (where is it by the way, I think I saw it sitting in someone's back paddock?) to prospective voters, to claw back column inches in newspapers from their rivals and ultimately sway public opinion and win the 2010 state election.

So it was hardly surprising an investigation into the veracity of the legendary black panther would be thrown into the mix! Albeit somewhat riskily (did no one learn from Nathan Rees experience after he did the same thing right after he became NSW Premier? It was the start of a sudden slide right out of the top job, because he failed to establish his political credentials in other areas before tackling such a polarising issue).

Already Deputy Premier Peter Ryan has hand-balled the task to a disinterested (and perhaps faintly embarassed) Agriculture Minister Peter Walsh.
Certainly Walsh himself is too busy to devote much time to it.

This week his staff were clear about the Agriculture department's approach: ''We are conducting a limited investigation into the issue of big cats to determine once and for all if they exist.''
Elsewhere they were quoted as saying they had "already gone back and looked at the department's files on the issue."
"We won't be investing big dollars in this but we do think it is important and it will not be ignored," a spokeswoman said. "Without wanting to pre-empt the outcomes one way or another, we still do feel it is important to put the folklore to rest - one way or another.
"We will also ensure the question of whether or not big cats exist in Victoria is examined by people with the relevant skills."

So they've already looked at the files/reports - really? have you? several thousand reports dating back 150 years? methinks you might be fibbing there - and you're going to put the "folklore to rest".

Sounds like this is a fait accompli and the new government, and its obedient department, has already determined the hundreds of people who have reported seeing these animals (which includes departmental staff and zoologists) are deluding themselves with folklore i.e. bullshit, fantasy, make believe.

In other words they're liars (oh, but they're voters as well, so they can't be dismissed straight away).
What people need to understand about this situation is that there will be no 'investigation', not in the true sense of the word, not right now and perhaps not ever.

We know from media reports over the years that the department's network of doggers, who concern themselves with livestock attacks and wild dog reports, have already been gagged and told they must report all suspected 'big cat' sightings and livestock deaths as 'dog'. So already the reporting network has been tainted.

We know in NSW that staff from the Agriculture department in that state have had their jobs threatened - and for what? For admitting they too had seen these strange creatures firsthand, and believe 'something is out there'. Would it be so very different in Victoria?
The Victorian investigation in the third of its kind in Australia - the first was conducted in Western Australia in the last 1970s-early 1980s, the second was held by the NSW State Government in the 1990s (and briefly resuscitated in the '00s). Both of those inquiries were farcical and trod a similar path.

To WA's credit they at least dispatched a vet to investigate the livestock killings and sightings firsthand, even though he was a bit silly and insisted pigs were killing the sheep!
NSW, like Victoria, chose the path of paperwork, and refused to investigate any sightings that were not reported to them in the first instance.

The Victorian government has merely directed someone to spend a few hours flipping through the files.
It may seem like a small thing, but if government authorities are so entrenched in the mindset that hundreds of years of big cat sightings are rubbish and have already reached their conclusion before ever launching an investigation proper, it makes you wonder what else they're botching on a grand scale - infrastructure? amenities? health? - and why voters keep tolerating it.

But we don't want to be too negative - so how could they claw back some respectability?
Why not set aside some money for DNA testing? Engage a vet (not someone from the department, or already in the department's employ) to oversee the process, and speak with key people who have been involved with the collection of secondary evidence in Victoria, NSW, and WA. Set aside 6-12 months for the investigation. Leave no stone unturned. It really doesn't require as much manpower as they would have you believe.

It seems so simple, but reading a poorly compiled file on the subject is probably much easier and less painful. Shame.
Posted by RR at 10:30