Will the Night Parrot come in from the cold in 2011? 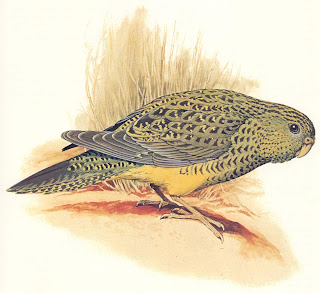 Just about any conversation between bird watchers anywhere in central Australia will almost certainly turn to a discussion about Night Parrots.

But with so much rain Down Under in recent times (and Night Parrots love wet places), could 2011 be the year someone, somewhere, finally shines a light on the Night Parrot? Steve Murphy, over at Australia birding website Bird-o, thinks it's a possibility.

"They are mystical birds, bordering on mythical beasts. Few other birds anywhere in the world are as intriguing. There are no photographs of living birds and no recordings of their calls.

"A Night Parrot was once transported alive by ship to London Zoo and observed to be strictly nocturnal. Much of what we know about the birds is from these early encounters.

"No person alive can set out to find them with success. Consequently, a rich and enticing folk-lore has accumulated. Like the one that flew into the cabin of a truck in the Pilbara in 1975. The driver put it into a box, but it escaped during the night. Or the one that was recovered from a water tank at Haast’s Bluff in 1957…

"The last confirmed living Night Parrot was observed at Nichol Spring, WA in 1912; it was observed, and then shot and skinned. Its crop was filled with spinifex seed and “limestone herbage”. The following 80 or so years yielded so few substantiated records that many people believed that Night Parrots had followed Paradise Parrots into extinction."
Posted by RR at 10:28