'Roos run horses off the track in Victoria 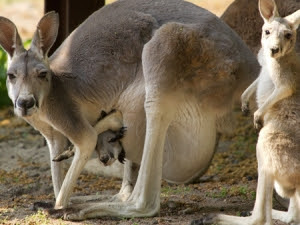 FEISTY macropods forced organisers to abandon the annual Hanging Rock Australia Day races in Victoria after a mob of kangaroos repeatedly invaded the track.The Hanging Rock Racing Club holds only two race meetings a year - on New Year's Day and Australia Day - in a tradition going back more than 125 years.
The race track is at the foot of the famous Hanging Rock formation in the Macedon Ranges.
The area is famous as the setting of Picnic At Hanging Rock, a novel and subsequent film about the mysterious disappearance of three schoolgirls and a teacher on an outing at Hanging Rock on Valentine's Day 1900.
Posted by RR at 10:05