From the archives: The Case of the Euroa Bunyip (1890) 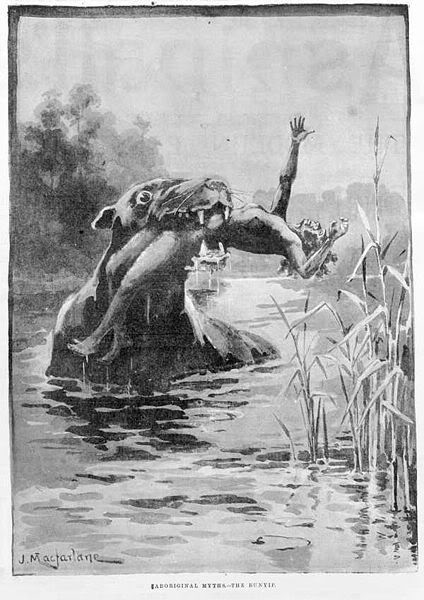 The Euroa correspondent of the Melbourne Argus writes:-    Considerable excitement has been caused in Euroa by reports as to an extra- ordinary animal having been seen in a swamp at Wylonemby, about fourteen miles distant. The swamp is about 150 yards across, and a creek flows through it.

For six years or more the swamp is reputed to have been the haunt of something abnormal, tales being told of dogs flying out of the place, and never again being induced to enter. Last week a couple of young men went into the swamp for the purpose of cutting reeds, which are 6ft. high and very thick, when they were alarmed by a sudden splashing and snorting near at hand, and the rushes waved as if allowing passage to some large animal.

They quickly retired, but next day one ventured back to carry out the reeds be had cut, when he was again alarmed by strange sounds, he leaped upon a log, and at some thirty paces away saw a large head upreared, which he likens to that of a bulldog. It kept this position for about ten minutes, when it disappeared, the motion of the rushes giving the idea of an animal some 30ft. long.

The young man was greatly scared. On a report of the occurrence appearing in the local journal a party of Euroa sportsmen went out to the swamp, where they were joined by local residents on horseback.   After beating about for more than an hour they were about to give up the quest, when a sudden rustling was heard, and two of the party saw an enormous tail as thick as a man's thigh disappearing into the large trunk of a fallen tree.

A shot was fired at the animal, but, its effect is a matter of conjecture. Attempts were made to dislodge the bunyip, but without avail, the only result being a small black snake, which was quickly despatched. Night coming on the party retired, but will again visit the scene on Saturday.

Those who saw the animal describe it as being of a yellow colour underneath and a dark brown above, "as thick as Mr. Barr's bell-topper." It is supposed to be an immense serpent, such as is found in Queensland. 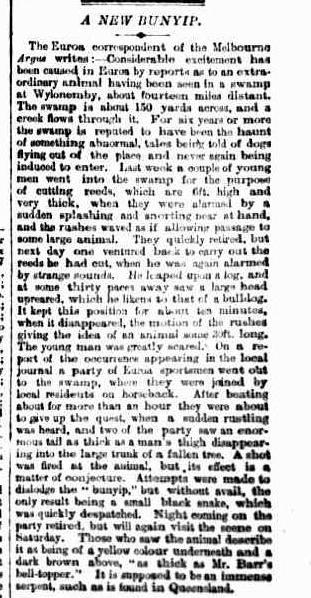