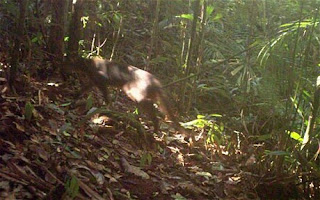 The UK Telegraph is reporting that one of the world's most elusive wildcats - long believed extinct after it was last seen in 2003 - has been spotted in pictures from camera traps set up on Malaysian Borneo.

The Bornean Bay Cat, similar in size to a large domestic cat, has a long tail and either a reddish or grey coat.

Three pictures showing two or three of the Bay Cats were taken in the northern highlands of Sarawak state in Borneo by researchers working for the forestry department.


The last pictures of the Bay Cat were taken in Lanjak Entimau wildlife sanctuary in southern Sarawak in 2003 and it had since been classified as extinct.