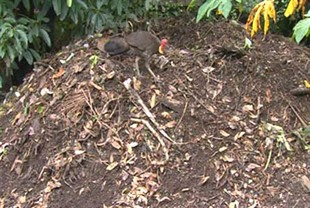 One Brisbane family was shocked to return to their flood-damaged home and find their backyard had been cleaned up by a turkey.

The Rudolph family, of Chelmer, was forced to abandon their flooded property when it was engulfed by one metre of water.

But during their absence a brush turkey set to work clearing up their debris-filled backyard.
The turkey, nicknamed Colin, has gathered debris from several backyards to construct a nest, estimated to weigh as much as four tonnes.

"He was looking at us like we were the lazy ones," resident Pete Randolph told Nine News.
"We were thinking of giving him a bit of extra training and putting him to work in the house."
Colin has reportedly cleaned up backyards all the way down the street in his efforts to attract female turkeys - and his tactics appear to be working.

"I've seen him wander down the street with a little harem of ladies," Mr Randolph said.
Much of Chelmer sits on the banks of Brisbane River and was badly affected during last week's floods.
Posted by RR at 08:07