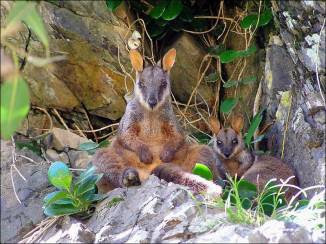 While the Tasmanian tiger is gone forever everyone can do their bit to help out other threatened species. Waterfall Springs Wildlife Sanctuary and Foundation has been working hard to help out the endangered brush-tailed rock wallaby.

The Waterfall Springs breeding program is about building a healthy captive population of animals for release back into safe wild habitats.

It is a major part of the Australian Government’s national brush-tailed rock-wallaby recovery plan to ensure the long-term survival of the species, listed as the sixth most threatened macropod in Australia.

The sanctuary successfully released captive wallabies into the wild in April and plans another release later this month.

There have also been 12 new animal enclosures and an education facility built at the sanctuary.

One way the public can help threatened species is to join its new volunteer group the Friends Of Waterfall Springs.

The group’s program aims is to provide volunteer support to the sanctuary so it can continue to support brush-tailed rock-wallaby conservation through the endangered species captive breeding program.