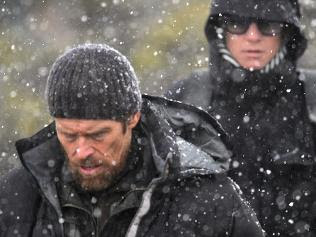 Filming on the psychological thriller The Hunter, starring Willem Dafoe, Sam Neill and Frances O'Connor, has just finished for the main scenes on a hill outside Deloraine, half an hour west of Launceston. Scenes were shot on location earlier on Mount Wellington.

Early production images from filming in Maydena, the Florentine Valley and the Central Plateau show the move will reward the film handsomely -- and Hobart was even able to be substituted for Antwerp in some scenes.

Dafoe was a relaxed presence on a tight set that was occasionally populated by extras playing themselves -- forest-living environmentalists.

"I like very much films where you're every day on the set; it has a really good benefit because you relax and you feel very little pressure to interpret," he said.

"You feel much more comfortable just being present and receiving the story, in a sense. The story can take you some place -- you don't have to force it."

The Hunter, due for release late next year, has solid international prospects with such a cast, which includes Dan Wyllie, Callan Mulvey and rising star Morgana Davies. It is the strongest project among several recent Tasmanian films.
Posted by RR at 11:43