Rescuers swoop in to save Aussie wildlife

WIRES rescuer Ann Mara said the organisation was currently looking after 18 kangaroos rescued from an island at Lake Burrendong near Wellington, in central NSW.The island was hosting 50 eastern grey kangaroos, some emus and a large goanna.
Kangaroos were loaded into kayaks and tinnies during the rescue from Two Tree Island. 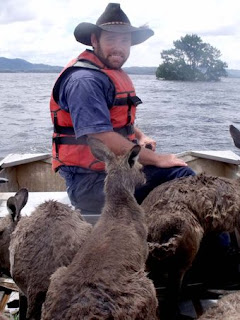 "One especially weak kangaroo had a child's floatie strapped to his back," Ms Mara said.
"Others were guided to shore or towed to safety with ropes around their necks."
Ms Mara said animals weighing up to 60kg were lifted over the side of a tinnie and taken to safety.
"Amazingly, the roos accepted the handling and proximity of humans without any issues," she said in a statement on Wednesday.
"A couple of the largest males had some fight left in them, but even they just seemed to be so relieved once they were out of the water that they just stood still."
But not all the roos were in luck.
"Unfortunately, some kangaroos were lost before the rescue, especially young, furless joeys," Ms Mara said.
"The emus were able to swim to safety, and the goanna is safe in a high tree."
Kangaroos have been displaced from their habitat in the state's central and southwest by rising floodwaters.
WIRES also holds concerns for a colony of endangered squirrel gliders near Wagga, and kangaroos have been seen trying to escape floodwaters in the area.
Ms Mara said WIRES, which rescues 50,000 native animals a year, relies on donations to do its life-saving work.
To help wildlife, make a donation at www.wires.org.au or call 1300 094 737.
Posted by RR at 15:22