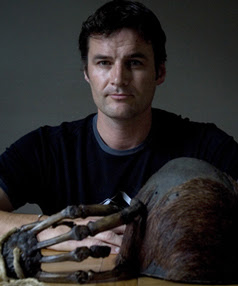 A KIWI adventurer is leading an international Yeti hunt!

Mike Allsop (pictured with a replica 'Yeti' hand and scalp created by special effects wizards WETA Workshops) , who conquered Mt Everest three years ago, is searching for the skull and skeletal hand of what was said to be a mythical "Abominable Snowman".

The controversial artefacts were stolen from a monastery in the tiny Nepalese village of Pangboche, in the 1990s.

"I am hoping that the person who has them wants to give them back," Allsop told Sunday News. "I hope they will have an alert set up on their computer for whenever the artefacts are mentioned on the internet.

"I am offering... to go and reclaim them. I will go anywhere in the world in person, free of charge, no questions asked and I will also buy them a beer."

Weta Workshops has created life-sized replicas of the skull and hand to help searchers find the real things.

Allsop will hand-deliver the replicas to the monastery when he and 17 Air NZ co-workers travel to Pangboche in April.

The original Pangboche hand and skull came to international prominence in the 1950s.
Texan adventurer and oil magnate Tom Slick photographed the items during one of his early missions to find the Yeti in 1957.

Two years later, one of Slick's team returned to the Pangboche monastery.

He reportedly drank Scotch with a monk until the local passed out, before stealing bone fragments from the hand. He then supposedly replaced the bones with those from a human hand, before rewrapping the Pangboche hand to disguise his theft.

The stolen fragments were allegedly smuggled back to America by a Hollywood star.
Then in 1999, the skull and what remained of the skeletal hand were stolen from the monastery.
Allsop, who scaled Mt Everest in 2007, was intrigued when he learned of the artefacts and determined to reclaim them for the monastery.

"These were very treasured artefacts," he said. "There was a huge outrage when they were stolen.
"The monks initially wouldn't show them to anyone, then slowly they showed them... unfortunately they showed them to one person too many."
Posted by RR at 11:38