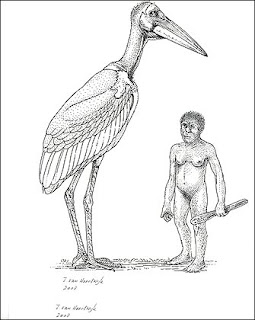 The remains of hobbit-sized humans in a gathering area of extinct giant storks is leading scientists to conclude that man may have once been bird food.
The carnivorous 6-foot-tall Leptoptilos robustus stork, among the largest bird to ever walk the earth, was likely a "ground-bound hunter, as its bones were thick," says Smithsonian researcher Hanneke Meijer.
The predator could have fed on fishes, lizards and birds, "and possibly even small, juvenile hobbits," she adds. "These birds are opportunistic carnivores—if you give them plenty of prey items, they'll hunt all of them."
Remains of the tiny humans were found among bird fossils in the Linag Bua cave on the Indonesian island of Flores.
It doesn't appear that the humans hunted the birds because no cut marks were found on any stork bones.
Flores was home to a wide variety of dwarf and giant species, including the pygmy elephant and the giant lizard, the Komodo dragon.
Many of the prehistoric animal became extinct some 17,000 years ago.
Meijer is aware that the island evokes images of a kind of land of the lost.
"Stories like the Lord of the Rings do add a nice fantasy touch to my work," she said.
Posted by RR at 11:09