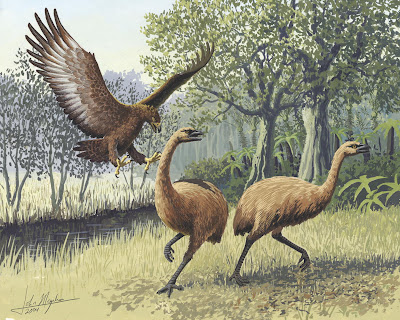 The start of 2010 heralded a new three-volume series on the Moa, New Zealand's extinct flightless bird, from author Bruce Spittle via Paua Press.
Bruce presents a compelling catalogue of sightings that seemingly support the continued existence of one of New Zealand's most enigmatic creatures, the Moa.
Believed extinct - its fate sealed by the colonising Maori population and its only other predator, Haast's Eagle, itself extinct - the Moa was one of a handful of unique birds and mammals that called the two island continents home.
You can read the first chapter of Bruce's books here.
Bruce's interest in Moa sightings began following a claim of a sighting in the Craigieburn Forest Park in the South Island of New Zealand on January 20, 1993. He writes:
"Initially I was happy to accept the explanation that the report was a publicity stunt by the local publican but after hearing him explain on the radio that his report was serious I was not so sure. When I read further that another member of the party was recovering from a heart attack, a life situation when taking part in a prank might not have a high priority, and that the third member of the party wanted to get a job eventually with the Department of Conservation rather than a reputation for being frivolous, I had some doubt about whether it really was a hoax. As I lived in Dunedin, about one day’s travel from the site of the claim, I felt I should go there to check it out and spent five days, 10–14 February 1993, in the area.
"I saw no evidence of moas but found a report in a hut book claiming that two moas had been seen in the same valley on 19 May 1992. This was an intriguing coincidence. The information about the 1993 claim was aired in the media, the general opinion emerged that it did not involve moas, and the Department of Conservation called off plans to make a search of the area. Later I established that the 1992 claim was a hoax.
"Even in the cryptozoological community, the 1993 sighting was generally dismissed as a hoax and the currently accepted view remains that although occasional moa “sightings” are still claimed to this day, they are becoming fewer and all have been discredited.
"However, after I talked to the three people involved in the 1993 sighting and made further examinations of the area where the sighting claim was made, I found there was no definitive evidence that a hoax or misidentification was involved and that, improbable though it seemed, the sighting of a moa as a cause for the claim could not be excluded. "
You can buy the three volumes of Moa Sightings by Bruce Spittle here.
Posted by RR at 07:08