In 2006 a late-night caller to an ABC radio show captivated listeners - 'Bongo', as he called himself, claimed to have been abducted by a Yowie (Australian Bigfoot) in the badlands of the Pilligia scrub (an area infamous for Yowies and sightings of the ghostly 'Pilliga Princess'). 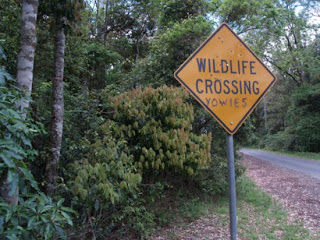 Bongo's 'everyman' demeanor - he described himself as an old truckie who worked in a rig hauling cargo up and down the arterial roads of regional Australia - and use of dates and locations convinced many his story was legitimate.
En route to Gunnedah one night, he takes a wrong turn and runs out of fuel halfway between the NSW country towns of Narrabri and Coonabarrabran.
Sleeping in his truck, he's awoken by the cab of his truck rocking wildly and the door being ripped off its hinges. He's grabbed by a thing that "defies explanation...it looked like it was horrific!" and carried off to its lair.
"We ended up at a humpy (bush shelter)...this thing had a real fetish obviously for real thin bow-legged knock-kneed white hairy legs - he had pairs of legs hanging up..." a stuttering Bongo tells the radio presenter. [Anyone remember that scene in Star Wars where Luke Skywalker is knocked out and carried off to a snow cave by a Yeti-type creature he later slays using The Force?]
Now, before Bongo launches into his tale, straight off the bat he tells the radio presenter he's in a sanitarium, Happy Days Retreat, an improbably named nut house for the insane, perhaps better suited to a Stephen King novel because some quick research proves it doesn't exist!
Apparently he has been there since the big incident, but he's got access to phones and 'Nurse Annie' tells him people go out looking for the monstrosity that damaged his truck and took him back to its humpy, which alarms him no end.
His wild and highly derivative experience supposedly inspired the play 'Acacia Hills'.
We think Bongo's tale is a funny hoax, but what do you think? Have a listen to Bongo here.
Posted by RR at 15:44