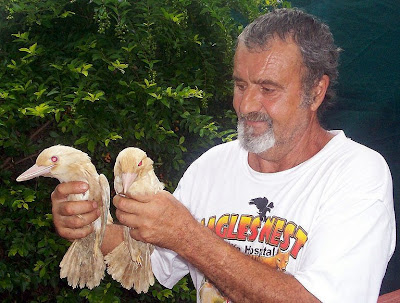 We were only just blogging about albino Australian wildlife the other day, so to see this story land in our lap this morning is quite synchronistic!

A pair of never-before-seen blue-winged albino kookaburras, believed to have been swept from their nests in a wild storm, have been rescued by a farmer.

The six-week-old birds, renowned for their laughing cry, were found waterlogged at the base of a tree by a cattle farmer near Ravenshoe, in far northern Queensland, said Harry Kunz from the Eagles Nest Wildlife Sanctuary.

The pink-eyed, pink-beaked and starkly white creatures, thought to be sisters, are the first specimens of their kind ever found in Australia, Kunz said. They are still too young to feed themselves or fly.

"Everybody asks me 'are they rare?' They have never been seen because in nature they would not survive a few days out of the nest because their white colour sticks out and every reptile, owl or predator will get them," Kunz told AFP.

"In the whole of Australia I know there is about three white laughing kookaburras but they are not albino, they have black eyes. For blue wings nobody knows that they exist or can be hatching in this colour."

Wild storms which had recently rocked the area were believed to have swept the unusual chicks from their nests, he added.

Feeding on a diet of small mice, cicadas and moths, the birds were in good health and would be raised at the sanctuary, said Kunz.

"Luckily this farmer found and saved them, they're the real heroes, because probably within the next day they would be dead," he said.

Kunz, founder of the non-profit park, said he was seeking public sponsorship for the birds' care and would offer the rights to name them to the highest bidders.

Usually cream-breasted and bellied with dark brown and blue wings, the kookaburra - a type of kingfisher - is an iconic Australian bird which is best known for its call, which sounds uncannily like human laughter.
Posted by RR at 10:15