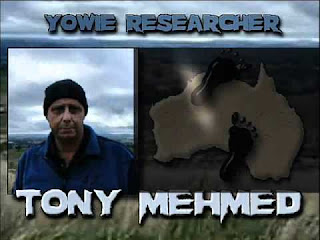 Australian yowie researcher Tony Mehmed is a special guest on the Nite Callers internet radio show this week. This is the second time Tony has appeared on the show, and apparently he's pulled one of the highest audiences the show has ever experienced!
Tony discovered his interest in the Yowie while in High School in 1980. His friend's dads would tell stories of large hairy creatures that would stand by the side of the highway and watch them as they drove by in their trucks. These stories captured Tony's attention and spawned a major interest in the subject.

Tony has been researching for more than 20 years and has had several close encounters with the Yowie and has photographed what many believe to be the image of a Yowie in one of his research areas.

Listen to the show at: http://www.blogtalkradio.com/nitecallers/2010/11/22/tony-mehmed-returns-to-nite-callers-radio
Posted by RR at 14:11