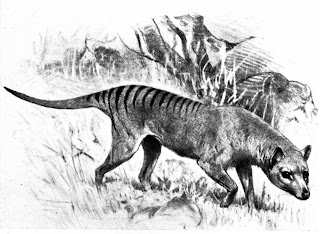 Despite a number of Loch Sport residents and also tourists to the township having claimed sightings of thylacines (Tasmanian Tigers) over the years it appears that the thylacine may have ultimately met its doom and vanished from the area.
During the late 1990s and even through to 2009 thylacine sightings were spasmodically recorded during most months and years. However since early 2009 the sightings have almost dried up to the point where the most recent sighting recorded was on January 30th 2010 in Loch Sport with a prior one recorded on January 17th near Golden Beach. Since then no other evidence has been produced or for that matter sightings been recorded.
Murray McAllister continues in his search for the thylacine and has detailed his efforts onto his website located at: - www.tassietiger.org
“It’s got to the point now where we really have to question the existence of the animal in Loch Sport. Through my research since 1998 I have found that the thylacine is very elusive to the point where we have seen the odd koala and emu here along with our one or two thylacine sightings but now all three species of animal are no longer about!” said Murray.
“One now has to question human impact on the area!” said Murray. “A few years ago (2005) they had a big clean up of the Golf Course, removed a lot of the vegetation and poisoned off the rabbits. Maybe the poisoned rabbits were in turn eaten by the thylacines and they may have suffered a similar fate. The same for the Fox baiting programs have they also had an impact with the thylacines eating the fox baits?
Thylacine sightings used to plentiful at the front of the town near the Golf Course but now with the added “Fuel Reduction Burn Offs” the vegetation and landscape has been altered and the thylacines may have moved on!
“Kangaroos that had been hit by cars during road kill would often be dismembered in that they would quite often be found with their heads missing indicating a thylacine presence, now they remain largely untouched and rarely show signs of any predation. Perhaps the block clearing and house building that continues in Loch Sport also may have restricted thylacine movement in and throughout the township. It certainly isn’t as prevalent as it was almost a decade ago,” said Murray.
“It will be pretty sad if the animal doesn’t return to Loch Sport as it really had proven to be one of the last remaining sanctuaries where people like I held hope that the magnificent thylacine might still survive and re-establish itself as part of our unique Australian wildlife heritage. I’m hoping that people might eventually come forward in the near future to dispel my doubts about the animal no longer being sighted in and around Loch Sport but if we don’t hear anything significant within say the next 12 months we might have to give it up as an animal of the past.
"Even though I’ve had over 20 sightings of the thylacine here, with others also having more than 10 sightings there has certainly been a disturbance to the natural wildlife throughout Loch Sport over recent times and nobody can explain the reasons why this has occurred. The kangaroo and wallaby populations along with bird life are also well down on the observations of the past and we need to investigate what has caused this change in an effort to lure the wildlife back!” said Murray.

“It’s not only just what I believe in but it’s also what makes Loch Sport a unique place to visit and live. If you lose the wildlife then people will not want to come down here. Where else in Australia do you see kangaroos along with the odd thylacine walking down the street?" posed Murray.