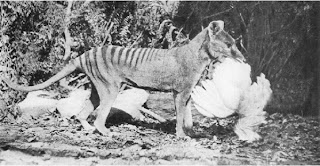 Psychology Today has a brilliant review of Paper Tiger: A Visual History of the Thylacine by Dr Carol Freeman on its website.

As a result of reading Freeman's thesis, reviewer Jonathan Balcombe writes: "I had mistakenly thought that the Thylacine's extinction was a tragic accident, when in fact it was a malicious thing, a result of deliberate efforts bent on its extermination."

"Anthropogenic extinction is hardly a new thing. After arriving in North America, European settlers ushered out the Carolina Lorikeet, the Steller's Sea Cow, the Labrador Duck, the Great Auk, and most famously the Passenger Pigeon.

"Island species are especially vulnerable because they have nowhere else to go. On Madagascar, the Dodo was clubbed and cooked to extinction within 100 years of the arrival of Portuguese sailors and Dutch settlers. It took the Maori a few centuries longer, but they too had neither the foresight nor the conviction to avoid sending several species of Moa to oblivion in New Zealand.