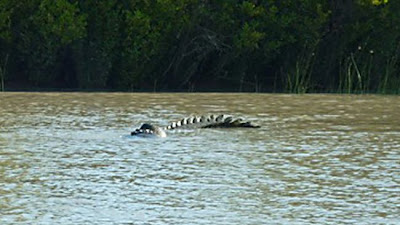 COULD this be Normanton's own "Loch Ness Monster", an elusive 8m giant that has residents in the Gulf thinking twice before taking out the tinnie?

Rumours of a massive croc lurking near the township of Normanton have revived memories of the famed 8.6m monster shot in the Norman River in 1957, and claimed as a world record.

Local pastor Elton Thompson sparked a frenzy last week when he produced photographs of a croc slide about 1km from town, which indicate the presence of a huge animal with a girth of up to 2m.

Now fisherman Clint Spry has revealed photos he took of a huge croc in the Norman River with a tail "as long as my boat".

"It had locked jaws with an albino crocodile and was just throwing it around like a rag doll," Mr Spry told The Sunday Mail.

Pastor Thompson started a sensation when he put his photos of huge slide marks and claw prints on his Facebook page and relayed a story of a crocodile recently spotted at the same location that was "at least as big, if not bigger" than the legendary 8.6m Savannah King, that has a life-size replica in Normanton.

As national media outlets picked up the story, locals debated whether the croc really was that big or, well, just a crock.

One publican insists: "It's a wives' tale. There are no crocs that big near Normanton."

Others are adamant an oversize croc has been in the area for some time, growing bigger every year since Queensland banned commercial hunting in the '70s.

Long-time local Terry Cummings didn't hesitate when asked if he thought an 8m croc could be lurking in the area.

Herbie Harold, 52, who found the original slide marks and alerted his pastor, said he had seen a massive croc in the same spot once before.

The Sunday Mail enlisted Mr Harold's expertise last week in a bid to find the monster (one of Elton's photos is shown below). 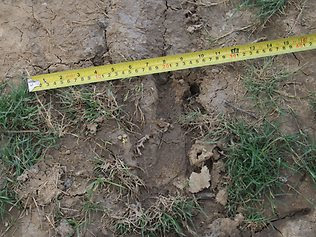