The Hunter sets his sights for Thylacine 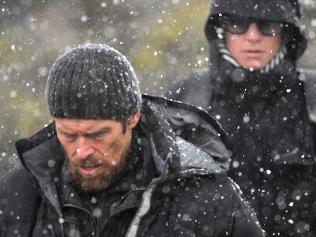 Hollywood has descended upon Tasmania in the form of actors Willem Dafoe and Sam Neill, who are part-way through filming scenes for the new psychological thriller The Hunter. The picture above is a still from one of the scenes already shot.

Based on the book by Julia Leigh, filming will be underway until December 2010 in the last place the Tasmanian Tiger called home before its extinction.

But what's the book about?

The story revolves around M, the main character of The Hunter, a 'mystery man' searching for the mythical thylacine, the Tasmanian tiger. Assuming a false identity, that of Martin David, Naturalist, he presents an everyman figure, pursuant of unknown objectives.

A biotechnology corporation has employed him to find the animal for its own hidden purposes, and he has arranged to board with the Armstrongs, a family who live on the edge of the Central Plateau, a vast wilderness area in Tasmania. When he arrives, he finds the family bereaved by the recent disappearance of the father, Jarrah, a scientist, up on the plateau.

Jarrah's wife, Lucy, is grief-stricken and leaves her children, Sass and Bike, unsupervised, as she spends most of her time in her room in a drug-induced stupor. M will use the Armstrong house as the base camp for his frequent trips into the wilderness, and he must rely on the children to raise the alarm should he disappear on one of his journeys. 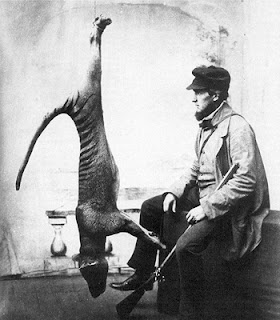 The interplay between the various 'missing' and 'mystery' beings in the book is cemented by the spectre of the lost Jarrah Armstrong, for whom M becomes a sort of 'substitute'. Fundamentally, though, M is the antithesis of Jarrah, for where Jarrah's science is about preservation, M's is about destruction; where Jarrah loved his family, M's feelings towards them remain obtuse. M is not naturally comfortable in a family situation, and for him the role of substitute is just that, a role. It is as if a part of M is missing - the part which feels compassion, or real love.

The legendary tiger is 'missing' too. Its elusiveness has made the tiger an iconic figure: the town is named Tiger Town, there is a Tiger Creek, the local butcher has on display a stuffed thylacine pup. It also raises the question of the tiger's presumed extinction: is this a tragedy or a necessity?

M has a dream in which he is pursued like the animal he is searching for; he is a figure who embodies the dichotomy which the tiger represents. About to commit what many would consider a monstrous act; he is also dangerously attractive.

The 'last' tiger's plight raises complex questions - is survival always a preferred option? Is extinction necessarily bad? No answers to these questions are offered - they are simply raised in an effort to highlight the uncertainties implicit in existence. The tiger also represents the 'beast within' us all. As M becomes more obsessed with his quest, he assumes the nature of his quarry.
Posted by RR at 19:16