Exciting news from China this week - The Shennongjia Nature Reserve in Hubei province has examined a strand of hair which it has not managed to identify, prompting local people to speculate that it may belong to the 'Wild Man' aka the Yeren, China's own Bigfoot!


Piao Jinlan, a researcher at the reserve, said that scientists need to continue their tests before they could identify the species. The hair is said to be thicker than human hair and thinner than horsetail hair, and the reserve posted a photo on its website on November 22.

More than 400 people have claimed to have seen the half-man, half-ape "Wild Man" in the area in the last 100 years. Witnesses describe the creature as walking upright, more than 2 meters tall and with grey, red or black hair all over its body.

An investigative team was set up in 2009 and started a large-scale search for the mysterious creature in Shennongjia this year.

And there's this from the CFZ archives: As far back as 1981 people were pondering alleged Wild Man 'nests, hair, tracks and faeces... 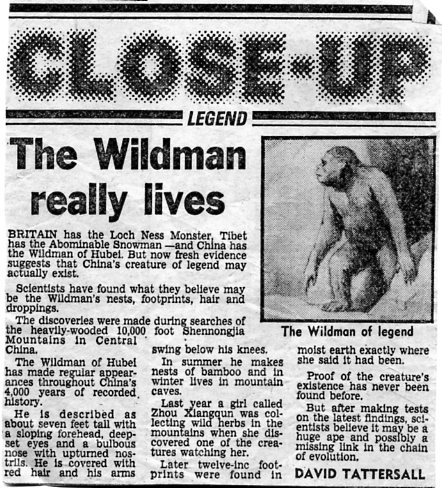