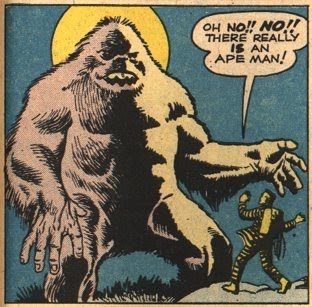 The intrepid explorers have arrived in India!
As we've mentioned on this blog before, Adam Davies, Dr Chris Clark, Dave Archer, John McGowan, and Richard Freeman have gone to India in search of the fabled Mande-Burung, India's own Yeti.
The creatures are described as being up to 10 feet tall, with predominantly black hair. Most importantly, they are said to walk upright, like a man. Walking apes have been reported in the area for many years.
These descriptions sound almost identical to those reported in neighbouring Bhutan and Tibet. Witnesses report that the mande-burung, which translates as forest man, is most often seen in the area in November - hence the timing of the expedition.
The Garo Hills is a heavily forested and poorly explored area in Meghalaya state in the cool northern highlands of India. The area is internationally renowned for its wildlife, which includes tigers, bears, elephants, Indian rhino and clouded leopards.
To keep abreast of their adventures, and find out more about the Mande-Burung, visit the lads' blog.
Posted by RR at 19:47