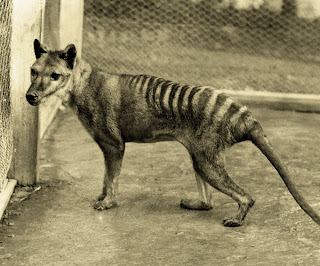 A sobering reminder of how fragile many species are...

September 7, 1936 was a historic day for Australia's endemic wildlife.

It was a day of no return, not for some ground-breaking discovery or the passing of a famous celebrity, but rather the extinction of a species cursed by hysteria, greed and apathy.

For at least two million years, the thylacine – Tasmanian tiger – had roamed the Australian continent. Humans first came ashore some 46,000 years ago. Our megafauna began to decline, marking the start of our Earth’s 6th mass extinction. Unlike the last one, which finished off the dinosaurs some 65 million years ago, this one is not caused by a wandering asteroid or comet, super-volcano or other natural phenomenon. It is caused by us.

"Australia, we now know, was the first continent to be stripped of its giants … rhino-sized marsupial diprotodons, massive kangaroos, six-meter-long goannas and horned tortoises as long as a Volkswagen Beetle … Thus, in its first forty millennia, the sixth extinction ran a wild and deadly course, exterminating the world’s giants. Australia lost 95 per cent of its land-animal genera weighing more than forty-five kilograms…" Dr Tim Flannery.

As the sixth mass extinction progresses, the thylacine disappeared from the continent, about 3000 years ago, leaving only the Tasmanian tiger population still co-existing with the early Aborigines.

Since European colonisation on Tasmania in 1803, the 'tiger' was exhaustively shot or trapped by sheep farmers paranoid of the marsupial predator. Whole-scale extermination was encouraged by private and state bounties, and lucrative rewards from international museums and zoos. Competition with feral dogs and diseases among the remaining, weakened populations, all contributed to its demise.

The last confirmed record of a wild tiger came from a farmer who killed the animal in 1930.

Six years later, the thylacine was finally granted legal protection. This came far too late. In the same year - on September 7, 1936 - the last surviving Tasmanian tiger on Earth died in Hobart’s Beaumaris Zoo after 12 years of captivity.

The thylacine was gone merely 131 years after the first European encountered it. In 1996, Australia declared September 7 as National Threatened Species Day, in commemoration of this tragic loss.