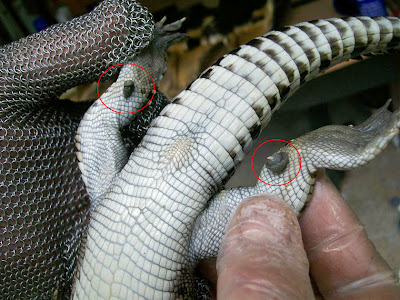 A saltwater crocodile found in the Northern Territory has been described as a "freak of nature".
The half-metre long reptile has sharp spurs protruding from the underside of its back legs.
The five millimetre-long spurs connect to a bone stemming from the crocodile's ankle joint.
"I don't know whether a croc's been playing up with a platypus or not, but it looks a bit funny, I reckon," said crocodile hunter and taxidermist Mick Pittman.
"I've never seen anything like it."
Mr Pittman, known as "Crocodile Mick", says he and his family have been in the crocodile industry for 53 years.
He thinks the spurs might be mutant toes.
http://www.abc.net.au/news/stories/2010/08/05/2974200.htm
Posted by RR at 21:05