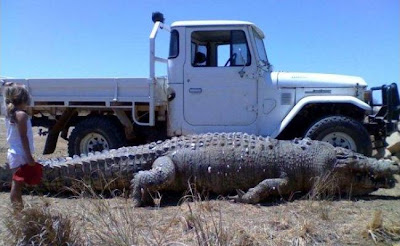 A monster 6.5m croc was killed by locals in a remote Territory Aborigine community because it was killing their cattle.
Jeida Francis, 23, said the croc was caught in Manangoora, an outstation 56km east of Borroloola in the mid '90s.
However, another earlier posting on the Internet seems to indicate the croc was in fact shot in the Albert River near Burketown, which is in Queensland. Which is only 500km away and just over the border.

Rom and Nik Whittaker have written a very interesting piece on the world's biggest crocodiles on record, which can be read here.

It reads in part: "The oft quoted 28 footer killed back in July 1957 by the Pawlowskis in the Norman River Estuary of the Gulf of Carpentaria remains just an unverified anecdote, no matter how many publications the story appears in.
"Adam Britton and I (RW) measured two of the largest saltie skulls in Australia, one called ‘Charley’ at the Darwin Croc Farm (a ‘mere’ 64.4 cm) and one shot by Terry Holtz on display at the Corrorboree Tavern near Darwin.

"This one measures 68.8 cm and is possibly the largest skull in Australia. Driving down the road we stopped in for yet another cold one at Bark Hut Inn, Annaburroo and there we found and measured just the mandible of a saltie 89.9 cm – bigger than the Corroboree mandible. Adam has heard of another croc skull in NT with a mandible of 96 cm (close to the size of the Paris Museum monster croc). The search continues for the largest Aussie skull.
"News of an estimated 22 footer has also come from the Bullo River. We did see some 16 footers and one massive slide, but the Bullo giant is still out there."
Read more about the latest NT monster croc here: http://www.ntnews.com.au/article/2010/08/05/169811_ntnews.html 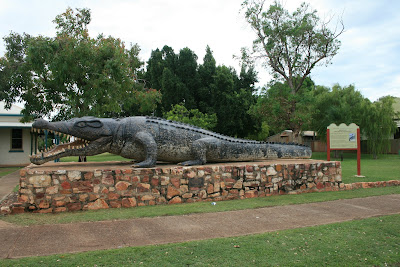 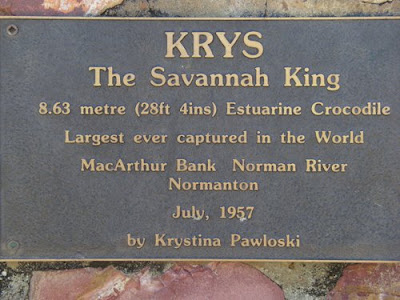