It's a weird, weird world 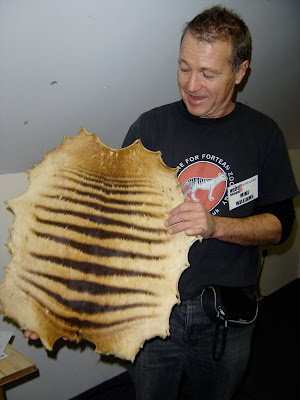 We're pleased to say the Weird Weekend was brilliant!
We joined an interesting cast of speakers spread over three days, talking about everything from big cats and orang pendeks to UFOs and the Holy Grail - quite a mash-up, but one that ensured there really was something (weird) for everyone.
We were told numbers were down, but there seemed to be more than enough people speaking, filling the pews in each talk and keeping the bar and book tables busy.
In fact the books for sale were hard to walk past.
The CFZ had a heaving table of books on offer, some of them recently authored by speakers at the Weird Weekend - namely Irishmen Ronan Coghlan and Gary Cunningham (The Mystery Animals of Ireland), Andy Roberts (The Berwyn Mountain UFO Crash), Carl Portman (A Daintree Diary), and Richard Freeman (The Great Yokai Encyclopedia).
We were deeply impressed by the quality of the covers (and the contents!) - it’s great to see the CFZ press going from strength to strength, inspiring many researchers to put their work into the public arena.
And the knowledgable men from APRA secondhand books were on hand with an esoteric selection of cryptozoology, folklore, earth mysteries, the occult and paranormal tomes, many of them hard to get. They even purchased two of our books, but just for the record, I think we probably purchased three or four of theirs!
From our perspective, our presentation on Australian Big Cats was well received and we sold out of the books we brought across to the UK for the conference.
We ran slightly over time, which left no time for questions, but we spent the remainder of the weekend catching up with those keen to discuss the presentation and the contents of the book.
We weren’t the only speakers with a colonial flavour.
UK arachnid enthusiast and amateur entomologist Carl Portman gave an interesting and passionate account of his time chasing Australia’s Whistling Spider, a type of tarantula, which he writes about in his new and highly recommended book, A Daintree Diary.
And Danish zoologist and hair analysis expert Lars Thomas tantalised the assembly with a mystery animal skin that just could have been a Tasmanian Tiger hide, although subsequent analysis revealed it to be the skin of a Zebra Duiker (Mike is pictured holding the skin), a small African antelope with a somewhat deceptive pelage.
Lars had a documentary crew in tow who happened to be making a film about him and his work for the Danish equivalent of the nature/science/discovery channel.
Which was lucky as perhaps one of the biggest events of the weekend was the positive identification (by Lars) of hairs collected from Huddisford Woods as ‘leopard’ (which we dubbed the Woolsery Leopard). An astounding development!
The hair ID certainly takes big cat research up a notch, and is a credit to those involved - the CFZ crew and colleagues Lars Thomas and naturalist and big cat researcher Jonathan McGowan.
Jonathan very kindly took us on an excursion to the same location where the hairs were found, testing the mettle of the Aussies who had previously been (good naturedly, of course) dismissive of the physical challenges of the English countryside.
Several bogs, fields and a forest later, we had a newfound respect for those deceptively gentle rolling hills.
It was certainly never dull!
Over the next few weeks we’ll be posting up additional bits and pieces from the weekend.
But we’d like to say a BIG thank you to the CFZ crew for staging such a memorable weekend - it’ll be hard to top it!
Posted by RR at 08:01