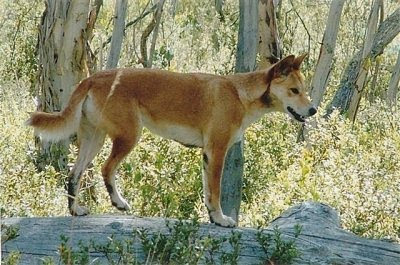 "We try hard to maintain genetic purity, so we even separate our breeding packs into sub-types, like mountain, desert and tropical dingoes," says ADCA vice-president Gavan McDowell. The association's aim is to breed a number of pure dingoes that can be released into the wild to recolonise areas cleared of feral dogs. Unfortunately, since dingoes are themselves declared animals, or pests, in most states, releasing them for recolonisation is currently illegal.
Some scientists, however, cautiously suggest the wild dog boom we have created may actually be the dingo's salvation.
"People don't always realise that a lot of hybrid dogs means a lot of pure-bred dingoes too, simply because of the numbers," says Guy Ballard, a dingo researcher with the Invasive Animals Co-operative Research Centre.

"It's impossible to prove, but I suspect there are actually more pure-bred dingoes around today than at any other time in history." Ballard's team runs several dingo-tagging projects throughout northeastern NSW, and he says that no matter where he and his fellow researchers go, they always trap some good (pure) dingoes. That's why he is uncertain of the need for breeding facilities such as that of the ADCA.
http://www.theaustralian.com.au/news/features/predator-explosion-dogs-the-bush/story-e6frg6z6-1225889672128
Posted by RR at 10:21