Bunyip? No, it's a horse, of course 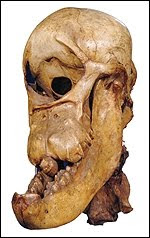 Although this skull was once said to belong to the mythical Aboriginal creature known as a bunyip, it was identified by the naturalist William Sharp Macleay (1792-1865) as nothing but a horse, deceptively presented to fool the credulous.

It was part of a major collection that eventually formed the Macleay Museum, assembled by three members of the Macleay family. This has been housed in purpose-built accommodation on the University of Sydney campus since the 1880s.
Celebrated for its holdings in entomology, ethnography, scientific instruments and historic photographs, the museum can trace its origins back to 1826, when Alexander Macleay was appointed colonial secretary for New South Wales - and brought with him one of the largest privately owned insect collections in the world.
It was developed by Macleay's son William Sharp and nephew William John, whose passion for taxonomy included a particular interest in intestinal worms. The latter would scour the fish markets for novelties and purchase specimens from local naturalists and "bird stuffers".
http://www.timeshighereducation.co.uk/story.asp?sectioncode=26&storycode=412864&c=1
Posted by RR at 09:06