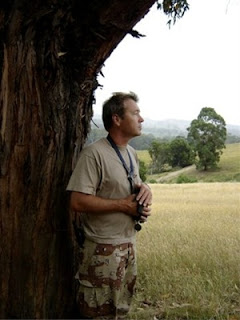 REGION - Eight years of research has gone into the production of the newly released book Australian Big Cats - An Unnatural History of Panthers, by Michael Williams and Rebecca Lang.

Writer/photographer Michael Williams and journalist Rebecca Lang have travelled all over Australia interviewing farmers, hunters, hikers and ordinary Australians investigating sightings, unexplained stock deaths and looking into the history books to gather information for the book.
Their travels have also brought them to the Ararat and Grampians region in their quest for evidence.
The presence of big cats in the Australian bush is one of the country's biggest mysteries and for many years there has been talk of sightings.
''There has been evidence of big cats in Victoria since the 1870s,'' Mr Williams said.
This evidence is a mixture of rich folklore, sightings and video evidence.
''In putting the book together, we have spent eight years researching and travelling around Victoria, New South Wales, South Australia and Queensland collecting reports, photos, video, scat and hair samples,'' he said.
''We want to prove the case that it's not just folklore, that these are valid reports.
''We want to prove the that evidence is overwhelming, that there is some mystery animal in Australia.''
The book is available online australianbigcats.com.au or through PO Box 5 Hazelbrooke 2779 NSW. The cost is $35 plus $15 postage.
http://www.araratadvertiser.com.au/news/local/news/general/book-on-big-cat-research-released/1889837.aspx
Posted by RR at 09:55