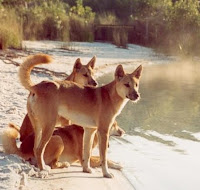 We've blogged before about the plight of Fraser Island's dingoes, believed to be the most genetically pure of any in Australia.

Specifically we highlighted the strange and bizarre treatment of dingo campaigner Jennifer Parkhurst, whose home was raided and photos and documents, including her book manuscript, confiscated by government authorities.

Now some of Australia's finest musicians, including the John Butler Trio and renowned animal rights campaigner Vanessa Amorosi, are rallying to help another animal rights activist, Jaylene Musgrave, a former music publicist, to save the animals.

“Nobody should have to walk past an animal that's starving and the Fraser Island dingoes are emaciated,” Mr Irwin said.