Quolls taught how to survive 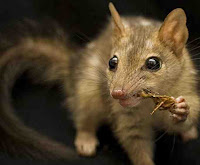 Scientists from the University of Sydney have trained a group of quolls to associate cane toads with feeling sick - a process called "conditioned taste aversion".

Before releasing the quolls into the wild, Professor Rick Shine, Stephanie O'Donnell and Dr Jonathan Webb fed each marsupial a small dead cane toad, not large enough to kill the quolls, but they were laced with a chemical that made the quolls feel nauseous.